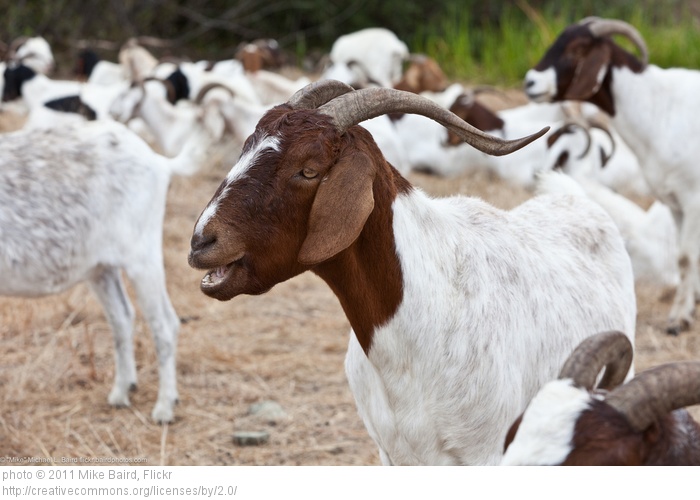 There are so many aspects to learn about when it comes to raising your own food. Butchering is one that seems so far out of reach for many of us. In many ways, it is a lost art. My own grandmother wouldn’t have thought twice about going out to the chicken coop and killing a bird for dinner—but if I am being truthful, I must acknowledge that the idea turns my stomach. Yet, to fully know and understand where our food comes from, I think the processing of meat may be one of the most important things we can study and learn. Previously, Jonas Hurley of River Run Farm & Pottery discussed here the idea of on-farm processing. Today, my friend Jereme Zimmerman goes further in depth as he explains how his family butchers goats at home:

Growing up homeschooled on a Northern Kentucky goat farm, I was intimately involved in all aspects of farm life. Woven into my studies was a regimen of feeding and milking animals, helping in the garden, and completing the seemingly unending number of farm chores. The cycle of birthing, raising, and butchering goats was a natural—and necessary—aspect of farm life. Although we often mingled with friends and relatives unfamiliar with what it’s really like to live on a farm, it wasn’t until I went off to college, traveled the country, and pursued a career that it became evident to me that the vast majority of people in our country either know nothing about how the meat they eat is raised, or have visceral reactions to the very thought of butchering an animal. I feel strongly that, if one is going to eat meat, one should become familiar with the methods by which animals are slaughtered and processed in both mass factory and small-farm settings.

Know what you eat. Eat what you know.

The vast majority of industrial-processed meat is subject to all manner of chemicals, hormones and other potentially dangerous and unhealthy ingredients. Since I no longer live on a farm and still enjoy eating meat, I fully admit that I have ingested plenty of meat that has been processed in factory settings. As I become more aware of the implications of consuming this type of meat, I am working to ensure my family’s diet consists primarily of meat that I have purchased from a trustworthy (i.e. organic and, when possible, local) source, or that I have butchered and processed myself. Even with access to many local farms, this is not always an easy task. I find that I have to work the concept fully into my psyche so that I am constantly keeping in mind that I need to do the necessary planning to ensure I am able to have food ready in time for dinner that is healthy, locally produced, and humanely raised and butchered. Until I have my own goat farm, I strive to visit my parents’ farm as often as possible to keep a regular supply of fresh milk and, when available, butcher a goat or two. Since their farm is a small operation and focuses mainly on raising and selling Nubian dairy goats, I substitute with meat, eggs and milk from farms and farmer’s markets in the Madison County / Berea area. I also like to purchase Boer goats for butchering. Although Boers are bred primarily for meat, and Nubians for dairy, I’ve found that both have flavorful and abundant meat if slow-cooked.

Butchering a goat can be simple and stress-free.

My dad has butchered many animals in his life, so I initially relied on his expertise for assistance with the finer aspects of butchering a goat, but have since begun to develop my own technique. Since goats are relatively small animals, not as much processing is required as for, say, cows or pigs. One or two people with minimal knowledge and little-to-no experience can do a perfectly adequate job of transferring a goat from the pasture to the freezer. With a little practice, I have found that goats can easily be butchered and processed in an hour or two with little fuss. My mom and I have developed a method for butchering goats that we feel is humane and doesn’t stress the animal. To put it bluntly, we are putting the end to an animal’s life, but I think semantics need to be considered when discussing this. While there are those who feel killing any animal is wrong, I look at it is an important part of the cycle of life. There are other reasons one may need to kill an animal; whether it be putting down one that is sick, preventing overpopulation, or simply to protect oneself from a dangerous animal. This is a fact of life and we may as well get down to business and discuss how to do it properly.

When slaughtering a goat, I prefer the animal to be as calm as possible; it should have no idea what is coming. For a recently weaned kid (around four months), I like to hold it on my lap with its neck over a bucket, stroke it calmly, and then slice the jugular with a quick, firm stroke of a sharp knife. If the goat is older, or particularly active, I have someone help hold it and keep it calm, and stand or sit next to it, cutting the jugular when the moment is right. The animal dies almost instantly; the only movement, other than an initial twitch from the kill, comes from involuntary muscle spasms. This also makes for better meat, as the goat will not have had time for an adrenaline rush to cause its muscles to tense. Although I give my mom credit for instructing me to become friends with the goat before slaughtering it, she seems to feel I have a knack for it, and has begun referring to me as the “goat whisperer.”

When I butchered my last goat, my two-year old daughter and her cousins were present. They weren’t in the least bit jaded, likely due to the fact that the animal didn’t show any signs of stress. They observed a gentle, kind, humane death, and then went back to playing while I finished processing the meat, occasionally coming around to have a look. I was present for many a butchering while growing up, and helped out where I could. My dad’s technique often involved hanging the goat by its haunches first, which caused all manner of stress to the goat, and wasn’t exactly easy on the participants. He no longer contributes to the slaughtering because this got to be too much for him. Although I don’t recall being traumatized in the least, I prefer the ease of my process, and the humane manner in which it is executed.

My wife and I like to teach our daughter that we should respect and appreciate animals for all that they provide us, from companionship, to milk and eggs, to healthy and affordable sources of meat. Sadie is still a bit young to understand fully (after watching me butcher a goat, she spent several days randomly exclaiming “Daddy cut goat!”), but by starting her young, we hope to instill in her a passion for living sustainably in all facets of her life.

Watch for future blogs on techniques for quickly butchering and quartering a goat, along with recipes and tips on using as much of the goat as possible, from hide to head. For more info on Nubian Dairy Goats and how they can provide a family with dairy products, meat, income, and companionship, visit Earthineer.com for blogs by Twin Meadows Farm and myself, RedHeadedYeti.