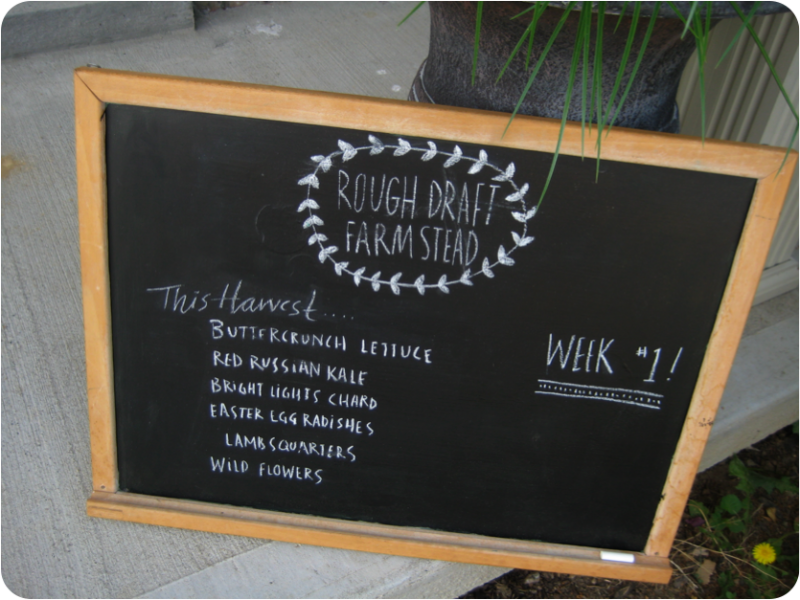 {This is the second farm in my Young Farmers Series.}

Perhaps it wasn’t love at first sight, but it certainly seemed meant to be: A young farmer-in-training named Jesse had a crazy idea to produce natural honey-based wines in Kentucky. He meets an adorable beekeeping-obsessed farmerette-in-training named Hannah. He proposes over a bed of greens while they are living as interns at a farm without running water or electricity. They elope and start a CSA. 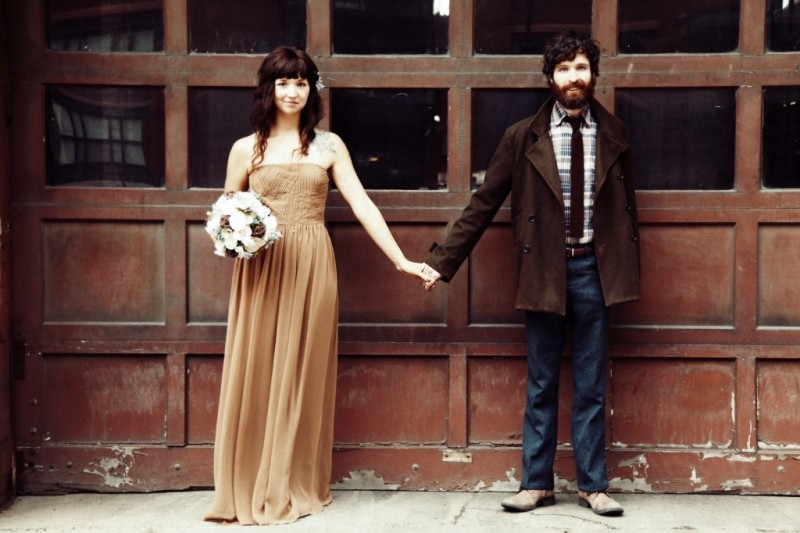 No, this isn’t the storyline of a romance novel I’ve been working on, but the real-life plot of Hannah and Jesse at Rough Draft Farmstead. Like many of the kids in our Young Farmers series, they came to the idea that they wanted to be farmers slowly and organically.

“I was living in New York for a few years and I worked in a small, boutique wine shop. We sold at retail a lot of biodynamic and organic wines. I ended up getting really interested in those kinds of wines—small production stuff. I would go to Europe occasionally and visit these producers who wouldn’t be like, ‘Oh, here’s our winery, here’s this and that…’ They would be like, ‘Here’s our dirt, you wanna taste it?’ I got really excited about that. They were just farmers, regular dudes who were doing an agricultural process. I thought, ‘I want to do something similar in Kentucky.’ I had a long-standing interest in food, too, because I was a cook for a long time. And I was originally from Kentucky and I wanted to come back here where my Dad lives and where my Mom now lives and be able to feed my family and be part of the community that I grew up in. I went through Bugtussle which is a farm in Southern Kentucky. I spent two years interning there, and that’s where I met Hannah.”

“I’m from Versailles. Went to school in Nashville, and then was in Italy. I moved to Chicago and just planned on traveling forever, never settling down, never going back to Kentucky. While I was in Chicago, I met some people that were beekeepers and in becoming obsessed with that, I found out how deeply it was tied to food. I thought that was so important. When I started thinking, ‘Maybe I would like to learn this,’ I was also getting older and realizing, ‘Well, maybe I don’t hate Kentucky. It’s actually really great and it would probably be a good place to learn this sort of thing.’ I started looking at internships and that’s when I got the internship at Bugtussle. And that’s where we met when we were working together.”

Their farm name, Rough Draft, was chosen because both have a creative bent and also hoped to utilize draft horses in their work. However, it became a sort of self-fulfilling prophecy when their first attempt at buying land fell through. They had to quickly improvise, relocating from Owingsville to Danville, where they were forced to make a mad dash to get the garden for their newly formed CSA in the ground. They were fortunate that a family member of Hannah’s had this land available or they might have been facing the impossible — moving back to the city for real jobs and putting their farming dreams on hold.

Thankful for the second chance, both realize that their struggle for finding good, affordable farming land is one shared with so many other young farmers. When so much agricultural land is fallow in Kentucky, it seems unfortunate there isn’t a better way to connect this land to the young farmers who are willing and eager to work it. “Perhaps sharecropping could come back in style,” Jesse quips, and maybe he’s right. With land being lost every day to development and suburban sprawl, chatting with these farmers makes me realize that protecting some of that valuable acreage for agricultural use should be a top priority. 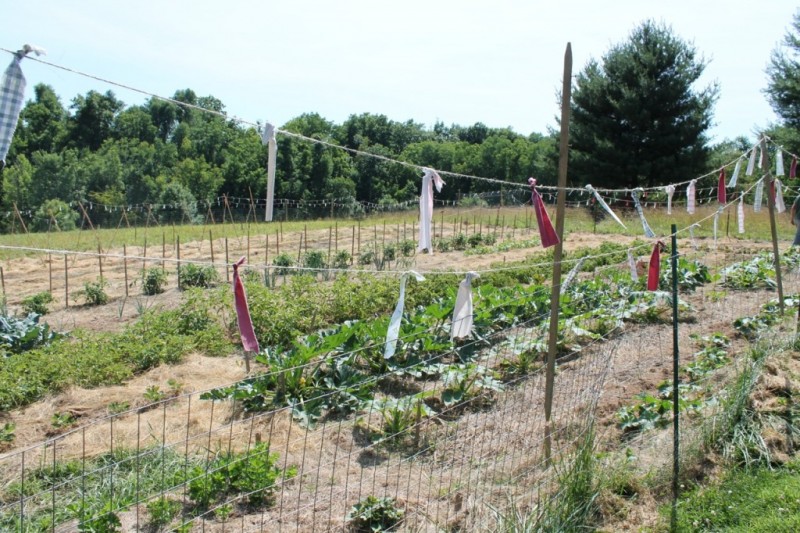 But the farm they are at now is quickly becoming a diverse ecosystem with gardens and rabbits and bees…oh my! Nestled on the road directly behind Danville’s WalMart, it seems a little bit David-and-Goliath-esque. Can two farmers on a tiny space start a CSA that will feed a handful of people and make a difference? Against a giant behemoth of a corporation like WalMart? Truthfully, it’s hard to say. Especially with so many factors fighting against the young farm, from marketing woes to this year’s incredible drought, it will be quite the uphill battle. 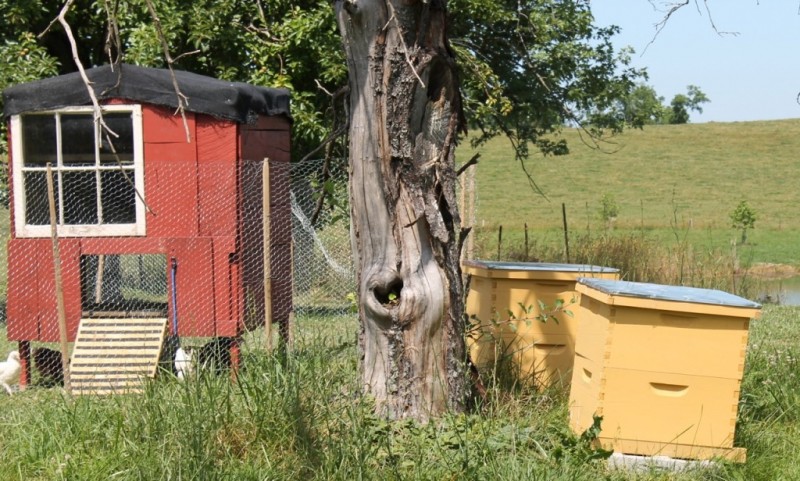 There’s the issue, too, of consumer awareness. Jesse and Hannah experienced firsthand what lack of education does while interning at Bugtussle, where farmers market customers were often put off by the higher prices of natural, local produce. Hannah was stunned by the behavior. “People were so rude. It made me realize how insulting it is to stand holding a tomato, looking at the person who grew it, and say to them, ‘Two dollars a pound?!?’ What you’re looking at… that’s their only income. And you are saying they’re not worth two dollars.”

“To talk about food to a producer like that, there are times I just wanted to cry. I thought, ‘This is our only income!’ I don’t walk into wherever you work and tell you that you are charging too much. Food in our culture is the one thing we look for bargains on. When you go to the grocery store, you buy the off-brand, you cut coupons. But if you are buying a car, you get the safest one, you want the one that’s made by the good company. You’ll spend the money because it’s a car, you want it to be safe. But food, something you put inside your body… it doesn’t matter if it’s the generic brand, who cares who makes it, it’s cheaper. But that’s part of our culture—the deal, the savings—and it applies to our food more than anything else.”

“I’ve never been so vilified for giving people something they need to live,” Jesse said.

Older and wiser perhaps, the couple realizes that part of the work of doing something like Rough Draft Farmstead will be educating the customers. Why is this tomato more expensive? What are the differences in production costs? How will paying more for this affect your local economy? Why is an heirloom different from a modern-day hybrid?

They put their money where their mouth is, too. Despite living on a small budget as they get their farm off the ground, they devote a large portion of their disposable income to food purchases. Jesse puts it best: “We’re extravagant with our food, because we want something good. We want the good milk, the good cheese. We spend a lot of money just on food and we’re farmers. But that makes sense, that’s what matters to us. Now that we appreciate how hard it is and how important it is.”

There are many other facets to the farm: Jesse is obsessed with fermentation — batches of wine and soured foods litter their kitchen counters. Hannah is an amazing and humble artist. They’ve had the privilege of meeting the amazing Wendell Berry and you really should ask them about it sometime… There’s just so much to say about them, and so little space here on Sustainable Kentucky.

If you want to follow the adventures of Hannah and Jesse as they continue their first year of farming, you must follow their amazing blog. More than your typical farm blog with garden harvest snapshots and occasional recipes, these two are really documenting what it is like to start up a farm (quick summary: it’s really, really tough). And I just can’t quit reading about it. Armed with their love for each other and a passion for feeding Kentuckians good food, this is one farming couple to keep your eye on. I’m very excited to see where they end up.

I’m also proud to announce that thanks to the awesomeness of bartering, Hannah and Jesse are the blog’s first official sponsor. I believe in what they are doing and hope I can help promote them along the way!