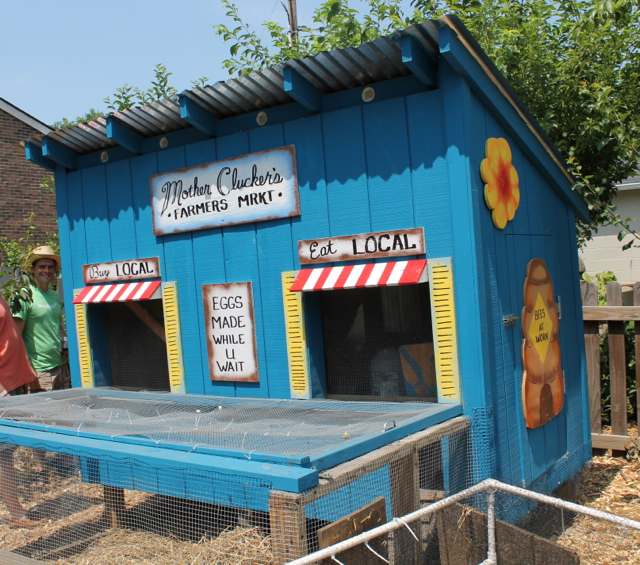 Sometimes the world can feel like a dark place. People are stockpiling survival supplies in their basements, waiting on the world to end. We’re drowning in a sea of high fructose corn syrup, genetically modified organisms, and reality television. We’ve lost touch with ourselves, each other, and the basic rhythmic cycles of the natural world. No wonder so many of us are suffering from depression, physical ailments, and a general feeling of hopelessness.

But oh . . . there is hope. And I saw it, as a guest at the second annual Tour de Coops in Lexington, an event put on by Cluck! The “Coop”erative of Lexington Urban Chicken Keepers. Fourteen beautiful families opened up their yards and their coops to curious onlookers. And hundreds of people braved sweltering heat to see them. (Don’t worry, large amounts of hand-squeezed lemonade were consumed to offset the heat!)

The coops ranged from artful to practical, elaborate to functional. Some were made from all new lumber, many were lovingly handcrafted from salvaged materials. Nearly all were accompanied by beautiful little backyard gardens. And chicken breeds of all kinds! 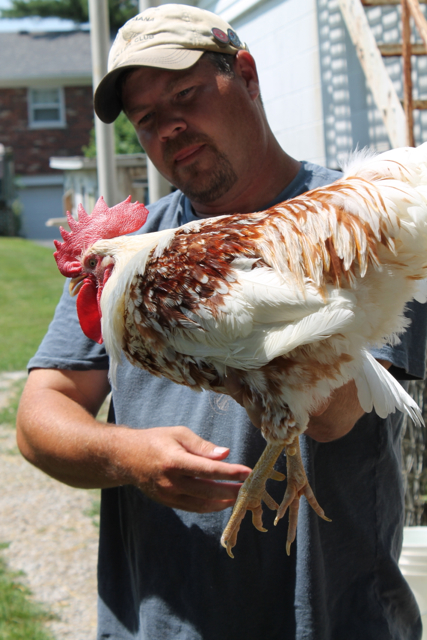 But more important than the coops, the chickens, and the raised beds, were the owners who lovingly cared for them and the fans who showed up to ogle them. These were people who really get it. They have figured out that the greatest joys in life come from truly simple pleasures—the cluck of a hen foraging for insects, fresh greens harvested from your own garden, the crack of an orange-yolked egg against a cast iron skillet. They find happiness in swapping gardening advice over a cold beer, in getting their hands dirty to feed the less fortunate, in teaching someone how to make food grow from a tiny seed.

People like Geoff and Sherry Maddock, who have converted the lot next to their home into an urban farm (fondly called Fourth Street Farm) that is a bright spot in the neighborhood. If only all gardens could be so cheerful, surely the world would be a better place?

Then there was the home of Chris & Lee Poore, where their teenaged son gave us a detailed play by play of why he loves raising chickens. They’ve even been using the chicken waste to help make compost for their beautiful raised bed garden. “We just took the temperature yesterday—it’s at 150 degrees! Perfect!” In an age where most kids are zoned out in front of violent video games, this was a kid who clearly was going to succeed in life. (And if all else fails, he could make an excellent tour guide someday!) 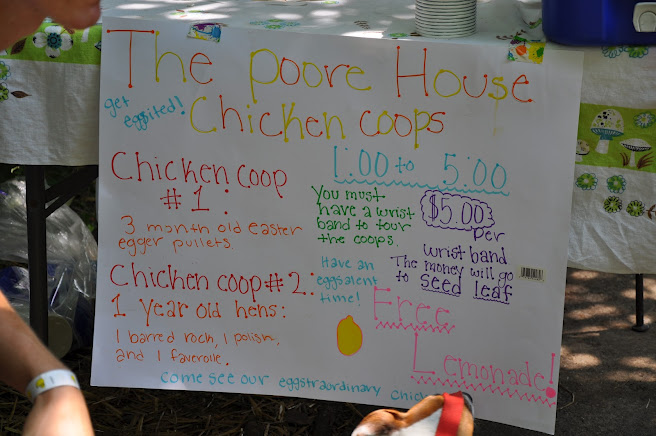 We got to see the chicken operation at Montessori Middle School. There, a group of exceptionally bright young students are raising chickens, bees, and a garden. They are selling the fruits of their labor, tracking expenses, and making profits. What amazing practical skills these kids are learning! What a great way to educate the next generation of farmers and well-informed consumers of farm goods.

There were also several Cluckers who didn’t have their homes on the tour this year, but visited each of the coops instead. I got to meet the venerable John Walker, who helped start the incredible organization Faith Feeds, which to date has gleaned 100,000+ pounds of produce for hungry Kentuckians. If you don’t think one idea can make a difference, then you need to chat with Mr. Walker. One casual thought to maybe give some extra vegetables to needy people has grown into a great group of people working hard to get fresh fruits and vegetables where they are needed most! 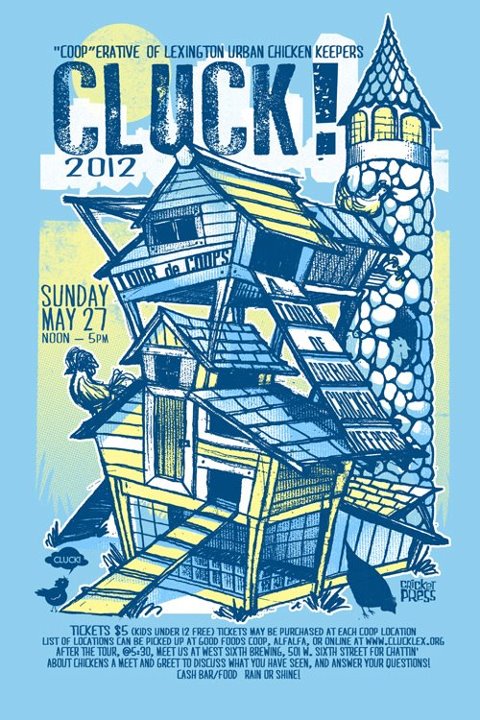 The founders of Cluck!, Anita Courtney and Miki Wright, were out touring as well. I wonder if they ever thought the idea to start a group of chicken keepers would grow into this? The group estimates that there are between 75 and 100 coops in Lexington, and several hundred people that showed up just for the tour! Anita is also working hard to get better, healthier food choices available to local kids, through the Better Bites program. Now Lexington’s park and rec department is stocking things like yogurt and apples as healthy alternative to the usual junky, high fructose corn syrup items they have sold in the past.

Also present were representatives from Seedleaf, which maintains several community gardens throughout Lexington. They compost, they grow, and they teach the community how to do it, too. Then there’s Blessed Earth, a non-profit with a focus on helping churches and other religious organizations care for God’s creation through making more sustainable choices and teaching their congregants how to as well. 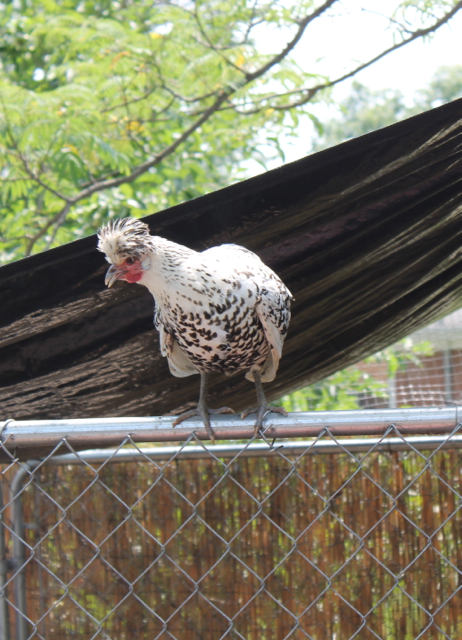 There were so many people interested in starting on the path to chicken keeping. Because I was traveling with Cluck’s very own chicken guru, Jeremy Porter (call to schedule your consultation today!), I got to overhear many of the questions people were asking about the logistics behind keeping urban chickens. People were genuinely enthusiastic about the possibilities. I can see why you would be after the tour. Getting to see other real people out there doing it was really inspiring. This country girl was definitely impressed. If the city folks are doing it, we really have no excuse in the rest of the state!

If you are anywhere near Lexington, mark your calendars for this event for next year. If you too far away , find or organize a similar group where you live. It would definitely be worth the effort.

{Special thanks to Shawn Burns, whose new business Farm2Lex will soon connect Lexingtonians with the locally grown foods they want. Shawn was very kind to connect me with all these lovely folks, haul me around the city, and answer 10,000 questions. He and his lovely wife are passionate about supporting the local food movement—and they are doing a great job at it! He also contributed many of the photos for this post. Thanks, Shawn, and everyone else that I had the pleasure of meeting. It isn’t often you can spend a day with total strangers and feel like you were hanging out with old friends!}