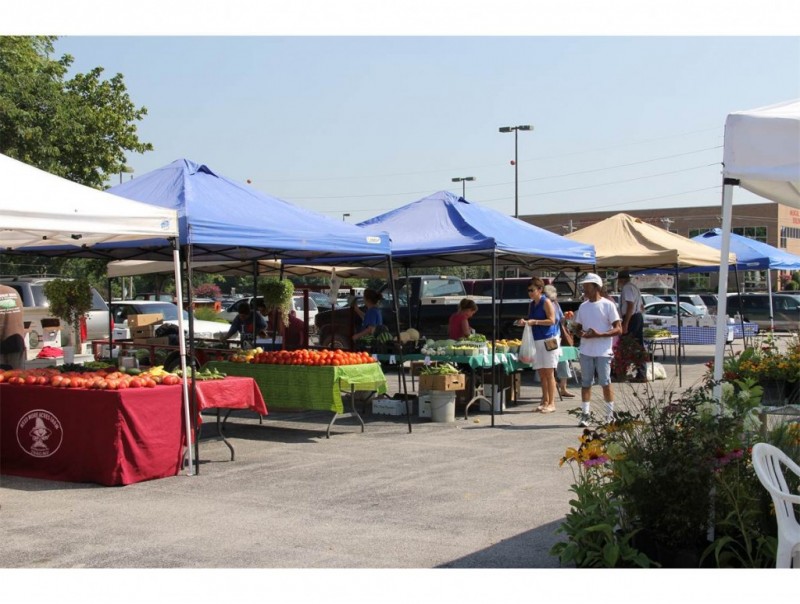 I am very excited to share with you a series I have been working on for a while now of profiles of farmers markets throughout Kentucky. Many of you have written in because you are interested in starting a farmers market or wonder what can be done to improve the one in your area now. I’ve been talking to market managers, asking them what has worked for them and what hasn’t. It’s fascinating to see the different strengths of different markets and the values that each market places a priority on.

First up is Alison Wiediger of Au Naturel Farm—”the ginger people” as I’ve been affectionately calling them. They grow baby ginger in high tunnels on their farm. Alison and her husband Paul helped organize the SKY Farmers Market in Bowling Green in 2004. This market has a strictly-enforced policy that everything must be grown directly by the people selling it. Nothing is trucked in from other producers. This ensures that everything sold at market is fresh, seasonal, and high-quality. 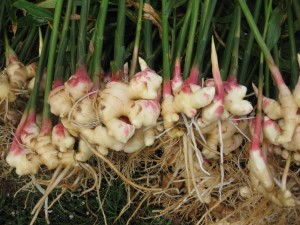 Paul and Alison grew frustrated selling at farmers markets where vendors simply acted as resellers for produce grown by others. “It’s a lot easier to drive to Nashville and pick up a truckload of washed and packed produce than it is to raise it. It was irritating to hear customers talk about how they were supporting the farmers, knowing that the produce could not have been grown by the farmer—watermelons and tomatoes in late April for instance. And to hear the vendors brag that when customers ask if something was ‘homegrown,’ they said yes ‘because everything is grown at someone’s home.’ It felt like the customer was being lied to.”

After much debate and attempts at reform, the Wiedigers and several other like-minded folks decided to start a market devoted to just local food. “It took an enormous time investment to get by-laws, incorporation, market guidelines (rules), and an application together—like all winter!  And, we had about ten people on the committee—a consumer, an attorney, a CPA, and several farmers. We all learned a lot from each other. But in April 2004, we opened, and haven’t looked back.”

Since 2004, the local food movement has grown exponentially with words like locavore becoming a part of the vocabulary of mainstream Americans. There are so many reasons to eat local, including fresher produce, food security, and the ability to know your farmer. There’s also the flavor factor—farms can select varieties to grow based on taste alone, rather than selecting merely what will ship and store well. Buying local, particularly in the setting of a farmers market, benefits the farmer as well. As Alison points out, “It levels the playing field.  There is no way a farmer can ever compete with a reseller in diversity of product.  For one, it is much harder and time consuming to harvest a pickup load of produce than it is to drive to Nashville and pick up a load of boxes.  So a reseller can have anything at anytime and in any quantity.  The biggest vendor at [a traditional market that allows resellers] sets up over 6-10 parking spaces depending on the time of year.  And, if a farmer is innovative and brings something new to the market that is popular, the reseller has it, in quantity, the following market day.”

As a consumer, I always prefer to buy local when possible and I know many of the readers here at Sustainable Kentucky feel the same way. That’s why it is important for me that markets enforce labeling of where the food came from. While this is becoming a more prevalent practice, there are still many markets, especially in smaller towns in Kentucky, that place little to no emphasis on local food. But as the many emails I’ve gotten on this topic attest to, this is what consumers want and a farmers market that wants to stay in the game really needs to be headed this direction.

Alison has a lot of insight for markets looking to switch their focus towards local foods. “If folks want to try it, I would suggest having a set percentage as a maximum on any given market day—say 20%, doing farm inspections to assure they are growing enough for the other 80%, and requiring place of origin signage on every item being sold.  I do think it is a losing proposition. Takes a lot of someone’s time, and the people who want to cheat, will.” 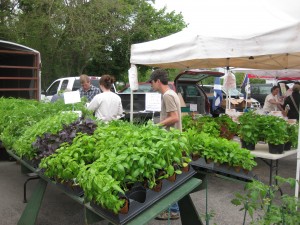 If all else fails, starting a market with a sole emphasis on local food may be the answer for farmers and consumers to ensure they are getting what they want—food grown by people who are open and honest about where it comes from. It’s important to establish clear guidelines for the market. Alison suggests finding a market that is similar to what you want and asking for advice. “Ask to use their bylaws, guidelines, and application as a template.  Most markets are happy to share.  Just when we started, there were not any in Kentucky, and very little information available in the state, so we used the internet to look.  The ones we used were in more progressive areas such as New England and California. Now, there are several in Kentucky and surrounding states.”

Establishing a new market is hard work—the hardest part often being finding farmers who align with your values and are willing to take a risk on a new venture. This was true for SKY Farmers Market and “for most beginning farmers markets.  We really recruited the first few years until we built a reputation.  Now, we are often in the position of being full—also not fun!”

But finding the right farmers is essential to the development of a great farmers market—as is finding the right consumers. “I think in a given market, there will be a handful of farmers that ‘anchor’ it.  But, without farmers, it is not a farmers market.  I think there needs to be a wide diversity of farmers, with a wide diversity of product, and from small to large to have a good market.  The sweet corn grower or blueberry grower is just as important to a successful market as the large market grower with four or five acres in a wide variety of produce.

“I do think farmer control is important.  But, I think the board of directors should have consumer representation as well.  Consumers usually don’t really understand the ‘whys’ of farming, and in reverse, the farmers can be too focused on what they need, and forget that without customer satisfaction, there isn’t a market.  So, our board must have a farmer majority, but allows for crafters and consumers to be members as well, and they keep us from making decisions that would be detrimental to our customer support. We have one consumer board member that in the beginning just could not understand why we were so adamant about re-selling, and he is now probably as serious as we are about it.” 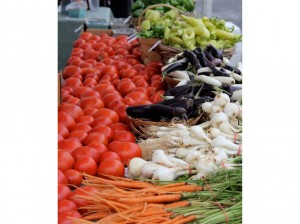 After initially establishing a market, the work just keeps coming. Alison explained the large amount of tasks that go on “behind the scenes” at their market, much of which is completed without compensation. “We don’t have a paid market manager at this time.  We did for a couple of years, but she resigned due to other obligations.  For our market, the manager was responsible for inspecting farms, the weekly newsletter during the season, organizing special events, communicating with farmers as to who is attending any given day, promoting the market to the community as a whole, manning a market booth on some market days, taking up stall fees, etc.  We also needed someone to man a booth for EBT to do EBT, but haven’t been able to find a volunteer(s) for that.  And, we really can’t pay what a market manager is worth without raising fees for the farmer.  It’s tough!

“Running a market is hard.  Especially if it is being done by volunteers.  Paul, as president, probably spends ten or more hours a week dealing with FM stuff.  I imagine the treasurer, secretary, and webmaster do as well.  Most members have no idea of the time spent, or any appreciation of it, so those who serve have to do so because they believe.

“I love our market.  When we sold in a resellers market, I went home angry every Saturday.  In our market, it is almost always a wonderful day.  We have made close friends we would have never even met, and for farmers, with limited access to social opportunities, it has been really beneficial.  Worth all the time and aggravation.  There is nothing better than selling produce you have grown and are so proud of!” 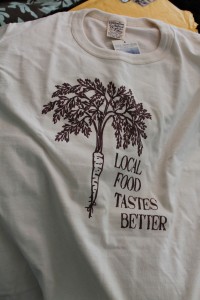 “Buy as much of your food as possible from local farmers.  If re-selling is allowed and labeling is not enforced, ask questions. ‘Homegrown’ means nothing!  Many groceries advertise ‘homegrown’ in their produce section for produce that is definitely not local.  ‘Where was this grown?’ is a better question.  If it is out of season, like tomatoes in May, ask the farmer about his growing practices. If he is using greenhouses or high tunnels, he will probably love to tell you all about it.  We are passionate about growing! If you buy something particularly tasty, please tell the farmer about it.  Like everyone, we love compliments on our produce.  And, if something just isn’t quite right, instead of avoiding the farmer, let us know about that too. It’s the only way we can improve our offerings.  Most of us will gladly refund or replace something that just wasn’t right.”

Thanks to Alison for answering all our questions! If you are in the Bowling Green area, be sure to follow SKY Farmers Market on Facebook or visit them April-October Saturdays 7 am-noon and Tuesdays 7 am-1 pm behind the Medical Center on the corner of 5th and High Street.